The night I met The Avengers

It was the due date of my Theory of Knowledge final paper, the last and probably most stressful assignment of my junior year of college at Arkansas State University.

As soon as that was done, I would commence packing up my dorm room and squeezing all my belongings into my 1996 Oldsmobile Bravada for the return trip to Northwest Arkansas a few days later.

May 4th also brought the beginning of a three-day trip with my dad and two high school friends, Mason and Brian, to Talladega, Alabama for a full weekend of NASCAR racing.

But those were the least of my worries for May 4th.

No, my biggest concern was a little, pretentious movie titled, Marvel’s The Avengers.

The waning hours of May 3rd saw me sitting in my bed in my NorthPark Quad dorm, furiously writing as much of a 9 – 10 page research paper as I could before deadline.

Not the paper’s deadline. Please, that was at 8 a.m the next morning.

The deadline I was under the gun on was midnight. That was when the first showings of The Avengers would play at Jonesboro’s only movie theater, the Malco Hollywood 16, the name of which changed on a weekly basis depending on which letters in its neon signage were out. 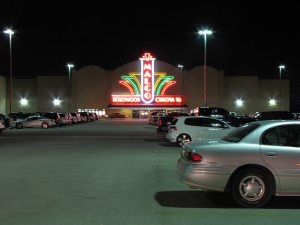 It was the theater I had also seen Captain America: The First Avenger the year before and numerous other movies during my four years in Jonesboro. The Hollywood 16 is where I finally started to become comfortable with seeing movies by myself (though I typically pestered people until it was my only option).

But that wasn’t the outcome on this night.

Much of the night involved me pecking away at the paper while anxiously looking at the clock on my desk top as I periodically texted the friends I’d be meeting at the theater.

Those friends were Matt, Coltyn, Crow, his wife Kelli and countless other twenty-somethings I knew from school

At 11 p.m., one hour before Joss Whedon’s vision of Earth’s Mightiest Heroes would be unleashed on the central time zone, I bolted from Room D in my four room suite, accompanied by my friend Sam, who lived in Room C.

We hopped into the Bravada, pointed it toward the Hollywood 16, located on the south side of the city, and booked it down Caraway Road, hoping there would still be tickets and seats waiting for us.

Then we sat waiting in our seats located in the first two rows of the main section, shoved over to the left side.

Midnight was upon us. The lights dimmed and for the next few minutes we were treated to the trailers teasing what other movies we’d be treated during that summer in 2012.

It was the summer to end all summers, at the time anyway. We got glimpses of The Amazing Spider-Man, which I would also see at midnight in that theater on July 3, on a second and final date with a girl named Madelyn.

There was the trailer for The Dark Knight Rises, which the audience clapped and hollered for at its conclusion. I’ve never seen that kind of reaction to a trailer.

I didn’t see TDKR on its opening day of July 20. Instead, I was halfway around world in mountain community of Kodaikanal, India, learning about the Aurora, Colorado theater shootings while in my hotel room.

Eventually the movie started. There’s only a couple of things about the screening itself I remember three years later.

The first was the crowds reaction to Captain America’s quip to Black Widow about Loki as he jumped from the SHIELD place.

“There’s only one God, ma’am. And I’m pretty sure he doesn’t dress like that.”

The line didn’t bring down the house in a fit of laughter, it almost brought it to its feet in applause in a way I hadn’t heard since Harrison Ford killed the bad guy in “Firewall.”

The biggest reaction from the crowd – and I’m guessing many others that night –  came from the Green Rage Monster (The Hulk) silencing everyone’s favorite demi-god.

After the Avengers saved the world and ate Shawarma, it was time to leave. Matt, Sam, Coltyn and I stood around Matt’s truck as the theater’s parking lot talking about the quickly became devoid of other cars. It was 2:30 a.m. after all.

We excitedly and tiredly talked about the spectacle we had just witnessed, every minute passing was one not being used to work on my research paper.

But we all eventually accepted that the moment was over. It was time to go home.

I got back to my dorm and for the next 2.5 hours juggled finishing the paper and not falling asleep.

The paper was completed in a daze around 5 a.m. I saved it, emailed it to myself and set the alarm on my phone for two hours later.

Or at least I thought I did.

The alarm never went off and I woke up sometime between 7 and 8. The next 15 minutes involved me rushing across campus in the way you’d expect from a college student on the last day of finals, printed off my paper at the library and ran the short distance to Wilson Hall. I found my Theory of Knowledge classroom locked and the light off.

A few moments later I slipped the paper underneath the door of my professor’s office and began trudging back to my room, resigned to the grade I had earned, which I don’t remember.

Over the next few hours I carried my belongings to my car, signed out with the really cute RA named Hannah and drove to Matt’s apartment. Once there, I collapsed on the couch to get my first real rest

Once there, I crashed hard on a couch, where I would stay until my dad and friend arrived to pick me up on the way to Talladega a few hours later.

I’d do it all again in a heart beat.

Where and with who did you watch The Avengers for the first time? Share your story from May 4, 2012 in the comments.

NASCAR writer for NBCSports.com. Former Sporting News intern. Graduated from IUPUI in Indianapolis with a master in sports journalism in 2014 and from Arkansas State University in 2013 with a degree in Journalism. Originally from Lewisville, Texas, now in Fort Worth. Ask me if I like Star Wars. I dare you.
View all posts by Daniel McFadin →
This entry was posted in Arkansas State, College, Film, Memories and tagged Arkansas State, college, memories, Movies, NASCAR, The Amazing Spider-Man, The Avengers, The Dark Knight Rises. Bookmark the permalink.

1 Response to The night I met The Avengers