Glickman: Only One Way to Tell It

Posted on December 1, 2013 by Daniel McFadin 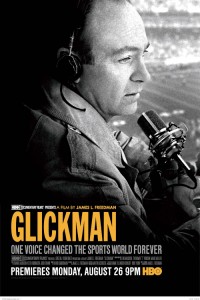 Some stories can only be told one way.

Then there is my favorite story telling medium:film.

The story of Marty Glickman could only be told this way.

I had never heard of Marty Glickman before this documentary was assigned as extra credit for one of my graduate school classes at IUPUI. Aside from listening to Paul Ellis and Chuck Barrett call Arkansas Razorback football games and Matt Stolz at Arkansas State, my knowledge of radio announcers is next to nil.

This knowledge gap has been rectified with the HBO documentary “Glickman,” expertly done by James Freedman, who directed, wrote & edited the film.

Freedman shows Glickman’s early days as a college football player at Syracuse, his controversial trip to the 1936 Olympics in Nazi Germany where he was unable run with the U.S. relay team because of he was Jewish.The majority of the film is about Glickman establishing of the foundations of basketball play-by-play before becoming the voice of the New York Football Giants (then the Jets, twice) where he inspired the careers of many of today’s announcers.

While a documentary is clearly a visual medium, it’s the one movie genre that is enhanced by other elements and that is clear in “Glickman.” Freedman implements the obligatory interviews with family members, well-known people who worked with Glickman and those who were inspired by him, pruning a sort of family tree of people whose careers wouldn’t exist had they not been exposed to his “orchestral quality” of play calling, as Bob Costas described it.

Freedman also uses archived interviews with the man himself in order for Glickman to tell his own story. One such interview came from the United States Holocaust Museum. This is also where one of the film’s only faults comes into play. It’s not revealed until late in the film that the voice of Glickman comes from these old interviews, because the announcer died of complications from heart surgery in 2001.

This is the second HBO documentary I’ve seen in the last month where the subject is presented as being alive until the end.  It might be a way of trying to get the audience to invest in the story, but I would prefer to be told upfront the movie’s subject is deceased. If it this had been a fictionalized narrative film, keeping Glickman’s fate away from the audience until the end would make sense.

However, the most important quality, the one that prevents this story from being told in the confines of the page, is Glickman’s voice. Not the Glickman from the interviews, but the Glickman heard in the thousands of sporting events he gave voice to for countless listeners for 50 years.

You could have every person who had ever heard him call a game describe it for the film or even a book, but justice would not be done without the soundtrack of Glickman’s voice.

NASCAR writer for NBCSports.com. Former Sporting News intern. Graduated from IUPUI in Indianapolis with a master in sports journalism in 2014 and from Arkansas State University in 2013 with a degree in Journalism. Originally from Lewisville, Texas, now in Fort Worth. Ask me if I like Star Wars. I dare you.
View all posts by Daniel McFadin →
This entry was posted in basketball, Film, History and tagged basketball, Germany, Glickman, New York Giants. Bookmark the permalink.