Official Synopsis: Times are desperate for the Rebel Alliance. Harassment by the Empire and a shortage of vital supplies are hindering completion of a new secret base on the ice planet Hoth. So when Mid Rim merchants offer much-needed materials for sale, Princess Leia Organa and Han Solo lead an Alliance delegation to negotiate a deal.
But when treachery forces the rebel ship to flee into territory controlled by pirates, Leia makes a shocking discovery: the fierce marauders come from Leia’s homeworld of Alderaan, recently destroyed by the Death Star. These refugees have turned to pillaging and plundering to survive—and they are in debt to a pirate armada, which will gladly ransom the princess to the vengeful Empire . . . if they find out her true identity.
Struggling with intense feelings of guilt, loyalty, and betrayal, Leia is determined to help her wayward kinspeople, even as Imperial forces are closing in on her own crippled ship. Trapped between lethal cutthroats and brutal oppressors, Leia and Han, along with Luke, Chewbacca, and a battle-ready crew, must defy death—or embrace it—to keep the rebellion alive.

That’s the nick name given to Luke Skywalker, Han Solo and Princess Leia Organa, the main protagonists of the original Star Wars trilogy.

Though they are the face of the saga, there is an unspoken hierarchy to the triumvirate that graced the silver screen from 1977 to 1983 and who have inhabited the pages of novels and comic books ever since.

So where does that leave Leia, the Last Daughter of Alderaan? Sadly, it seems to me the Senator turned Rebel leader has gotten the short end of the cultural impact deal. For the most part her character and legacy had been whittled down to jokes about her choice of hair style and of course the big elephant in the room, the costume that just keeps giving on the convention circuit: 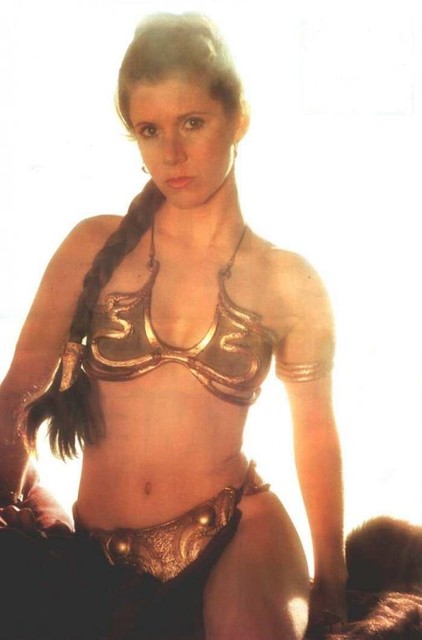 I’m not going to pretend I don’t appreciate that aspect of the character brought to life by Carrie Fisher. However, when I think of Leia, the images that spring to mind are those of her impatiently grabbing Luke’s blaster rifle in the middle of a detention block shootout to fire back at approaching Stormtroopers and creating an impromptu escape route into a garbage chute.

I also think of a face some would underestimate defiantly staring back into the dark abyss of Darth Vader’s mask, not giving an inch to Grand Moff Tarkin and then continuing to put up a fight even as the Death Star obliterates her home planet in the blink of an eye.

If any aspect of her was lost through out the trilogy, it was her being a survivor. Leia is never given any time to mourn from the moment she’s broken out of her cell in “A New Hope” all the way through the celebration on Endor in Episode VII.  It was explored in the exceptional (and Troy Denning’s best work) 2003 novel “Tatooine Ghost,” but not much since then.

But the tide has recently begun to change as Leia has finally been given her due, first taking a front – and – center role in the main “Star Wars” comic penned by Brian Wood, as Leia tries to find a world to build what will become Echo Base, while also ferreting out a spy in the Alliance.

Now she is the focus of the Martha Wells novel “Razor’s Edge,” the first of the “Empire and Rebellion” trilogy, where each book follows one of the “Big Three” in a one-shot adventure set during the fertile three years between “A New Hope” and “The Empire Strikes Back.”

One of the benefits of telling a one-off story is you can jump right into the action, which Wells does in “Razor’s Edge,” giving it more of “A New Hope” feel than any of the other movies. With a relatively brief 249-page count (compared to the 393 of Timothy Zahn’s “Scoundrels”), Wells is able keep the story going at a decent clip, not dwelling too much in one place until the third act.

If Wells get anything perfectly right here, it’s in the dynamic of Han and Leia. These aren’t quite the characters who will eventually settle down and have three kids while saving the New Republic on the weekends, but they’re two years into their strained, verbal-sparring friendship. Wells doesn’t beat around the bush and lets the character’s inner-monologues betray their respective stray thoughts on how they see each other.

However, the best moments aren’t when Han and Leia are  bickering, it’s when Wells shows these are two people, who despite coming from different backgrounds, have more in common than they’d like to admit, mostly in their tenacious ability to survive.

While it’s not on par with the best of Aaron Allston’s work, “Razor’s Edge” will make you laugh if not at least chuckle a few times. This is thanks to the brief use of C-3PO and R2-D2 and the welcome return of Chewbacca to the action. I can’t remember if he’s been present in a novel since his death in “Vector Prime,” but it’s good to be able to read his grumbling criticisms of Han again. In fact, that might be what I’m looking forward to the most in “Honor Among Thieves,” due out next March.

Wells also brings in some of her own creations to lighten the mood, specifically a pirate Leia hires briefly to help them escape from the “clearinghouse” controlled by the book’s villainous, Aral tukor Viest.

There are some setbacks to being a short, self-contained novel, the most glaring is the lack of development in the book’s antagonists, including Imperial commander Degoren, who is in pursuit of the Rebel group trying to get supplies for Echo Base thanks to a mole. Degoren isn’t around much and the protagonists only encounter him through space battles and a com link conversation. Seeing as how we know where the “Big Three” end up, it’s hard to have an Imperial antagonist not named Vader bring any real tension to the story.

The other foil for our heroes is Viest, the flightmaster of the “clearinghouse” and my first encounter with the Lorridian species, a race that can detect your true intentions through body language and subtle facial movements. This makes it a particular challenge for someone like Leia to deceive.

Wells makes Viest a character not to be taken lightly, especially in the way she dispatches nuisances with the help of an insane droid in an arena game, but we’re not given any background information about her until it’s almost too late.

A plot twist that isn’t –

There’s a mole in the Rebels and no one knows who it is…except the reader. While this is Wells first (and hopefully not here last) foray in telling a Star Wars story, she isn’t quite able to keep the suspense going in regards to who is leaking information to Degoren. It was fairly obvious from around the middle of the book who the traitor would wind up being, but that doesn’t keep Wells from having some humorous fun with the reveal and its aftermath.

While “Razors Edge” doesn’t depict a major event in the Expanded Universe like “Darth Plegueis” or the recent “Kenobi” by John Jackson Miller, Wells’ induction into the Star Wars universe does for Leia Organa what Miller did for Obi-Wan Kenobi. It give us a look at the toll of losing everyone you cared about and how Leia lives with that burden, even when she doesn’t have time to mourn while she pours herself into the Rebel Alliance.

This is an important book and I’m glad it exists, if only for the opportunity to explore the relationship between Han and Leia as it continues on the trajectory that culminates in Episode V one year later.

But what makes “Razor’s Edge” so vital, and why Wells deserve praise, is that it returns Leia to the foreground of a narrative that doesn’t involve her being captured by the Empire, being demeaned by Jabba the Hutt or being a tragic mother figure. It reminds us why she’s a leader in the Alliance. It also reminds us all of the pressure that comes with being seen as a leader and a survivor.

NASCAR writer for NBCSports.com. Former Sporting News intern. Graduated from IUPUI in Indianapolis with a master in sports journalism in 2014 and from Arkansas State University in 2013 with a degree in Journalism. Originally from Lewisville, Texas, now in Fort Worth. Ask me if I like Star Wars. I dare you.
View all posts by Daniel McFadin →
This entry was posted in Books, Movies, reviews, Star Wars and tagged Books, Del Ray, Han Solo, Luke Skywalker, Martha Wells, Princess Leia, Razor's Edge, Review, Star Wars. Bookmark the permalink.